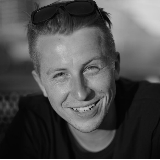 Prior to working on iCommercial, developed or contributed to a variety of iOS applications along with their Rails backends, e.g. :

Courses, notes, Q&A groups - all you need to study efficiently and achieve the goals!